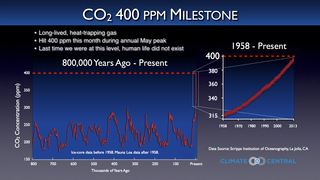 The last time atmospheric levels of carbon dioxide reached 400 parts per million, humans didn't exist. Before the start of the Industrial Revolution, global average CO2 was about 280 ppm, and it fluctuated between about 180 ppm and 280 ppm during the past 800,000 years. This month, some daily records touched 400 ppm for the first time since, probably, somewhere between 2 and 4.6 million years ago, when the closest equivalent to our species was Homo habilis. CO2 emissions in 2012 were a record 35.6 billion tons. CO2 concentrations in the atmosphere will decline over the coming months, as northern hemisphere forests take up some of the gas from the atmosphere; but in the northern fall, they will resume their trajectory upward - and upward, and upward. Read More
Be the first to comment

Here Am I, Sitting in a Tin Can

The movie 'Apollo 13' famously - and accurately - portrays an America that was already growing bored with its lunar adventures and taking moonflight for granted. Forty years later, the grounding of the Space Shuttle sparked a brief period of yearning for a time of grander ambition; but few eyes bother to look overhead for the International Space Station as it streaks through the night sky.

But Canadian astronaut Cmdr Chris Hadfield, today ending his spell as commander of the ISS, has helped remind us all what it is about spaceflight that is truly inspiring. It is not just being in space, per se, but the opportunity to look back onto the planet on which we all live.

Few have understood that better than Cmdr Hadfield, who over the last several months has used Twitter and Facebook to post a series of enthralling images of Earth - often several a day - that have earned him an appreciative following and probably done more to make the case for launching human beings into outer space than any human since Sally Ride. He capped off his tour of duty by releasing this outstanding cover of David Bowie's 'Space Oddity.' If it were up to me, Cmdr Hadfield would stay in orbit forever, entertaining and educating us all; but he doubtless yearns to feel solid ground, to breathe fresh air, to listen to birdsong and to hold his family. He has more than earned that right. Safe travels, sir, and thank you.