After five years of waiting and wondering, the Mother of All Fight Weeks is upon us. Floyd Mayweather will face off against Manny Pacquiao on May 2, and already the hype is at fever pitch. I, of course, am doing my best to add to it: 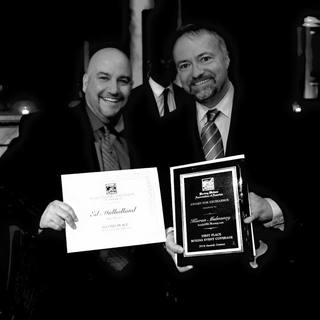 I could get used to this. Another Friday, another award. :) Tonight, I was honored with First Place in Event Coverage by the Boxing Writers Association of America for this piece about Sergey Kovalev dethroning Bernard Hopkins. With me in this photograph - taken by his wife Liz - is my good friend Ed Mulholland, HBO photographer, who won a photography award at the same annual BWAA dinner. Read More
1 Comments

Well hi, after far too long a gap on here - I had a feeling you might be involved with The Big One, Kieran - and a massive 'Well done!' :D What a tremendous accolade to be awarded in acknowledgement of your dedication and skills. 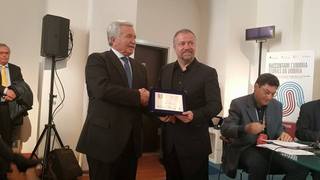 It was quite the week last week: Las Vegas and Los Angeles for the Mayweather and Pacquiao media days, and then on to Rome, Perugia and Paciano in Italy before coming home. For the best part of a week, I was pretty much in a different hotel room in a different town every night, but it was all for good reasons. There was the nerve-wracking enjoyment of hosting the media day shows, of course, but my flying visit to Italy was also special: I was this year's winner, National and International Sections, in the 'Stories on Umbria' International Journalism Awards 2015, for my Washington Post Magazine article on Paciano and olive oil. It was an enormous honor, and I am extremely grateful to those who gave me the award and who treated me so very nicely during my time in Umbria last week. Read More
Be the first to comment

The highly anticipated Floyd Mayweather-Manny Pacquiao clash is now less than two weeks away. Last week, each man held a media day/open workout, and in a sign of the immensity of the event, we livestreamed both days. I co-hosted the live shows with Showtime's Mauro Ranallo, and you can see the results here. (You'll want to start the Mayweather video at 1:53:00 or so, thanks to the fighter's tardiness; the Pacquiao broadcast starts at 11:28).

Going Down to Liverpool

So here's a story. As a young thing, I was a huge Bangles fan. In fact, I was for a while dating a woman whose previous boyfriend had produced their most recent album, so the way I saw it, we were practically related.

But the Bangles broke up, and life went on, and I became a boxing writer, as you do.
Then one day, I'm guessing about 10 years ago but maybe a little less, I was in Las Vegas to cover some fight or another at the Mandalay Bay, and as I'm walking around the casino, I see a poster that reveals that a) The Bangles have reformed (yay), and b) are performing at The Beach at Mandalay Bay that week (OMG!) but that c) the show is on Saturday night, when I'm going to be ringside (booo!).

Over coffee one morning, I express my sadness to my friends Gordon and Scott at Mandalay (as then they were, as I believe this was before The Corporate Unification), and they say, "No problem. We can get you a ticket, and the fight will be over before the concert starts." And the fight card begins, and people are getting knocked out left and right, and I'm all excited. But the TV fights all go the distance, and by the time the broadcast ends, I know I've missed my chance.

I slouch sadly down the hallway that leads from the bowels of the Mandalay Bay Events Center, in time to hear the final chords of 'Eternal Flame' and Susanna Hoffs saying, "You've been a wonderful audience. Good night."

And I was sad.

And that's the end of my story.

But this video features both some very young Bangles AND Leonard Nimoy, which makes it inherently cool and also makes me happy.