Approaching my 50th birthday, I find myself looking back at the contours of my life. I could not possibly have imagined it would follow the path that it is. From almost as long as I can remember, I wanted to write about wildlife and the environment, to be a defender of animals and their habitats. I pursued that goal with dogged determination: writing my first articles for New Scientist and BBC Wildlife when I was 18, co-founding the Whale and Dolphin Conservation Society at 19, appearing on TV discussing whales and whaling by 20, joining Greenpeace just before I turned 21, heading out on my first anti-whaling expedition to Antarctica at 23 ...  Read More
Be the first to comment

I've been uploading some videos to YouTube, including a couple from the North Pole trip: 50 Years of Victory cruising in the evening light off Franz Josef Land, and a polar bear wandering the sea ice as we headed north. Enjoy.

That Time Mario Andretti Literally Took Me for a Spin 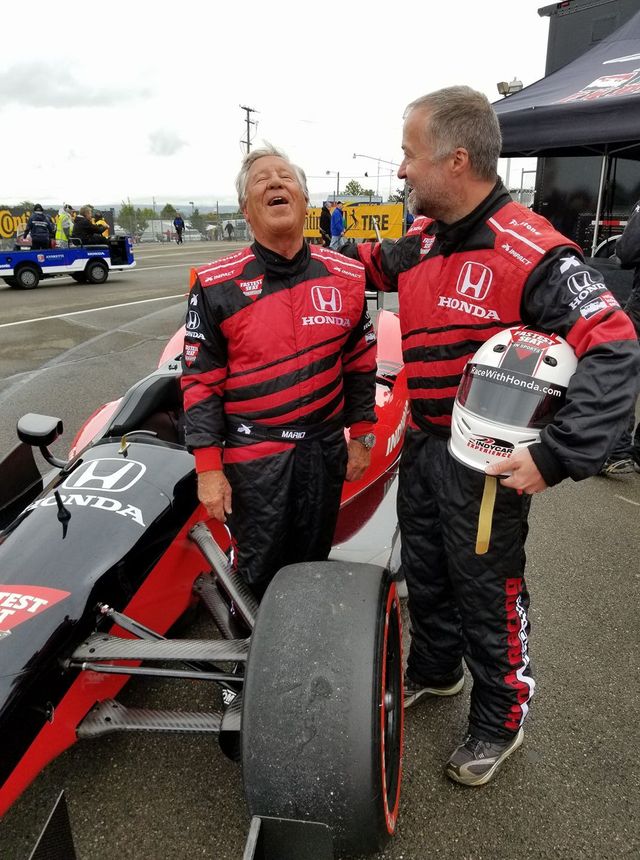 That moment when you tell Mario Andretti that you were the one in the car when he spun out ...

A good friend of mine, Jim Cossaart, is a rabid (I think he'd accept the adjective) fan of IndyCar. The other month, he suggested I accompany him to a race at Watkins Glen, New York. It was my first such experience and made all the more memorable by the fact that Jim and I were furnished, courtesy of Pat Caporali and Kate Guerra of IndyCar, not only with pit lane passes, but also the opportunity to take a pre-race ride around the track in a custom-built two-seater with none other than Mario Andretti.

Growing up in the United Kingdom, I became as a youngster a big fan of Formula One, and the first year in which I truly became invested in it was 1978, when Mario won the championship driving the now-legendary Lotus 79. So I didn't know much about IndyCar (at least not only Jim began indoctrinating me) but I certainly knew about Mario.

Long retired from active racing, Mario Andretti is still an ambassador of sorts for IndyCar, driving guests at 160 MPH every race morning. Mario Andretti, by the way, is 77 years old.

I'm not used to traveling at such speeds, nor am I used to wearing a helmet. I've never even ridden a motorcycle. So, somewhat embarrassingly, you can see in the video that as we pick up speed, I actually hang on to my helmet in case it flies off. Of course it wasn't going to fly off - but, well, it isn't always easy to think straight when racing along at 160 MPH.

It had been raining overnight, and there were wet patches on the track. Mario hit one, and as you can see, we went for a spin. It's amazing how many thoughts go through your head when you're in a car that's spinning at that speed. In my case, my very first one was, "Wow, that's so cool that Mario pretends to spin!" Then, when I realized it had been a legitimate spin and when it took a few seconds for driver or car to respond (or so it seemed to me in the back) I worried that I'd broken Mario Andretti and that I was going to be in so much trouble.

Fortunately, he restarted the car, got it into gear and raced us back to the pits - where the other guests lining up for a ride were buzzing and, frankly, jealous over my unscheduled detour.

Quite a few folks are fortunate enough to go for a ride with Mario Andretti during IndyCar season. I'm the only one I know who literally went for a spin with him.  Read More