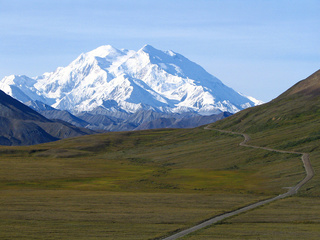 Not Mt. McKinley
When I lived in a tiny cabin in Anchorage, on the shores of Alaska's Cook Inlet, I could sometimes - if the day was perfectly clear and I squinted a little - see the peak of the continent's tallest mountain in the far, far distance. And when I did, I would tell friends, "I could see Denali today," and everyone understood. When we spoke of the mountain - as, this being Alaska, we did quite often - it was always Denali. Always. Denali - supposedly, although perhaps not in fact, Athabascan for "The Great One" - is a defining feature of the 49th State, and its name and putative English translation are ingrained in the state's vocabulary. Although there were outliers - deliberate contrarians and establishmentarians - virtually nobody in Alaska would refer to it as Mt. McKinley, its official name. Indeed, that imprimatur offended: McKinley, an undistinguished president, never visited Alaska not had any particular connection to it, yet efforts to have the insult removed repeatedly ran into roadblocks from the congressional delegation of McKinley's native Ohio.

Now, President Obama has taken executive action to write a 98-year-old wrong, and ensure that Denali is henceforth known officially by the name to which it is referred by all Alaskans. In the Great Land, the news was met with overwhelming enthusiasm and gratitude; to judge from the reactions of Ohioans, GOP presidential candidates and the multitude of social media users whose knee-jerk reaction is to oppose everything the president does simply because he does it, he might as well have announced that he was reversing the result of WWII. There are many reasons why perusing Twitter is enough to give a rational person reason to despair for humanity, and it seems strange that this particular explosion of faux outrage above all others has depressed me so. But is a topic that is close to my heart; personally, I am grateful to the president for his symbolic but significant gesture, and in time I hope the wailing and gnashing of teeth will find another target, as Denali continues to stand tall and imperious above the fray.  Read More
Be the first to comment