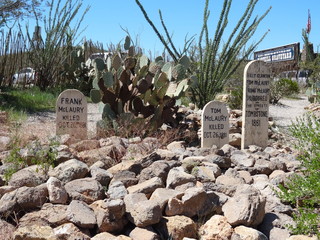 Yesterday was the 132nd anniversary of the Gunfight at the OK Corral, which I used as an excuse to write a piece I have been wanting to write for a while. Having already written about my particular and peculiar enthusiasm for Tombstone and the Old West for the Washington Post Magazine, and done my best to explain the events that led up to the gunfight for Discovery Channel News, my latest was for, of all outlets, ESPN. The story is the little-known tale of how Wyatt Earp was persuaded to referee a heavyweight title fight and how, in the fight's aftermath, he became so hated for the actions he took in the ring, that he was hounded out of town. Enjoy. Read More
Be the first to comment

The classic definition of chutzpah is the child who kills his parents and then asks for leniency because he's an orphan. But in recent weeks, we've begun to see the Washington definition: A party that does everything possible to sabotage a law and then professes fury when the law's launch is rocky.

On Tuesday, Rep. Paul Ryan became the latest Republicans to call for HHS Secretary Kathleen Sebelius to step down because of the Affordable Care Act's troubled launch. "I do believe people should be held accountable," he said.

How about House Republicans who refused to appropriate the money the Department of Health and Human Services said it needed to properly implement Obamacare?

How about Senate Republicans who tried to intimidate Sebelius out of using existing HHS funds to implement Obamacare? "Would you describe the authority under which you believe you have the ability to conduct such transfers?" Sen. Orrin Hatch demanded at one hearing. It's difficult to imagine the size of the disaster if Sebelius hadn't moved those funds.

How about congressional Republicans who refuse to permit the packages of technical fixes and tweaks that laws of this size routinely require?

How about Republican governors who told the Obama administration they absolutely had to be left to build their own health-care exchanges -- you'll remember that the House Democrats' health-care plan included a single, national exchange -- and then refused to build, leaving the construction of 34 insurance marketplaces up to HHS?

How about the coordinated Republican effort to get the law declared unconstitutional -- an effort that ultimately failed, but that stalled implementation as government and industry waited for the uncertainty to resolve?

How about the dozens of Republican governors who refused to take federal dollars to expand Medicaid, leaving about 5.5 million low-income people who'd be eligible for free, federally-funded government insurance to slip through the cracks?

The GOP's strategy hasn't just tried to win elections and repeal Obamacare. They've actively sought to sabotage the implementation of the law. They intimidated the people who were implementing the law. They made clear that problems would be exploited rather than fixed. A few weeks ago, they literally shut down the government because they refused to pass a funding bill that contiained money for Obamacare.

The Obama administration deserves all the criticism it's getting for the poor start of health law and more. Their job was to implement the law effectively -- even if Republicans were standing in their way. So far, it's clear that they weren't able to smoothly surmount both the complexities of the law and the political roadblocks thrown in their path. Who President Obama will ultimately hold accountable -- if anyone -- for the failed launch is an interesting question.

But the GOP's complaints that their plan to undermine the law worked too well and someone has to pay border on the comic. If Republicans believe Sebelius is truly to blame for the law's poor launch, they should be pinning a medal on her.