There's so much that is telling about this exchange between Energy Secretary Rick Perry and U.S. Senator Al Franken of Minnesota over the subject of climate change. Perry had, earlier, in the week, stated that he did not believe carbon dioxide is the primary factor in the warming climate, attributing it instead to "the warming of the oceans." Franken calmly dissected Perry's assorted points and claims until at the end, Perry simply couldn't hide the fact that, rather than being a skeptic as he asserted, he is a flat-out climate change denier.

When Franken posits that human activities are solely behind rising global temperatures, Perry states his outright refusal to believe it. It isn't because he takes issue with any of the scientific evidence or with the laws of physics; it's that he is unable to comprehend and unwilling to accept that such a thing could be the case. It's an excellent example of what the likes of Katharine Hayhoe have pointed out; that as much as we might like to repeat facts until we are blue in the face, facts alone simply will not budge deniers when they so utterly threaten their worldview. Read More
Be the first to comment

The Krusher Gets Krushed 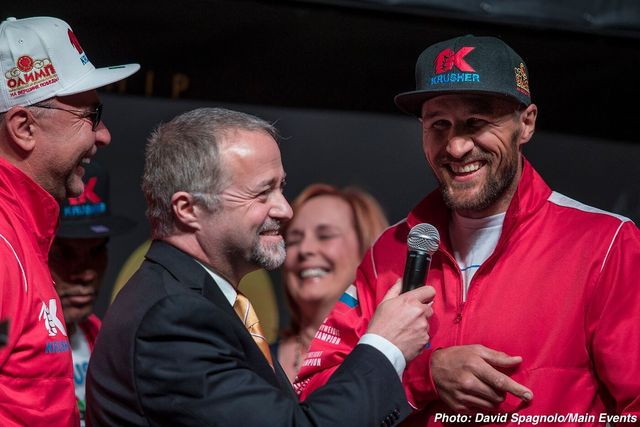 David Spagnolo, the photographer for boxing promotional company Main Events, caught this great image of light heavyweight boxer Sergey Kovalev and I enjoying a light-hearted moment during a livestream prior to Kovalev's bout with Andre Ward last weekend. Part of me blushes at it a little; the really good interviewers shouldn't allow themselves to get caught up in the jokes of a specific participant. But I let the mask slip here; although he's a divisive character, I enjoy Sergey. I have probably interviewed him and Gennady Golovkin more than any other boxers for HBO. It was to cover a Kovalev fight that HBO sent me to Russia last year. At this particular moment, he was cracking a joke about "shooting" Ward in the ring (he was partly trained by a biathlon coach), and just previously he had openly laughed when I told him that Ward's trainer Virgil Hunter said he had trained Ward to knock Kovalev off. But boxing has a great way of humbling you and making you look foolish, particularly if you are not 100% prepared, and that's just what happened last Saturday night. Although there was some controversy about the fight and the moment of the stoppage, centered around some low blows landed by Ward, the American did indeed knock out the Russian, hurting him badly with a booming right hand in the eighth round, and then launching an all-out assault until referee Tony Weeks stopped the contest.  Read More