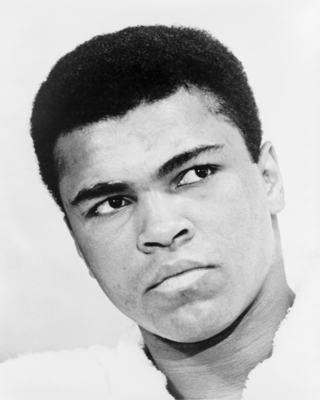 I find myself profoundly saddened by the death of Muhammad Ali at the age of 74. He truly was The Greatest. He was The Greatest not only for his peerless performances in the ring, or for his quick wit and good humor, or for the way in which he transformed showmanship in athletics, or for his later-life humanitarianism, or for the gracious and classy way he battled with Parkinson's Disease. He was The Greatest because, in an era of profound social upheaval, he did not shrink from the challenge of confrontation and principle, but embraced it. He not only touched the third rail, he grasped it tight and dared everyone to pry his hands from it.

I attempted to pay tribute to his life in this piece for Seeker.

If you want to understand why he was so great in the ring, watch what is widely regarded as his most complete performance, against Cleveland 'Big Cat' Williams in 1966.

And for just one example among many of his pop culture impact, here's Johnny Wakelin's musical tribute to arguably Ali's greatest night in the ring:

Many thanks to Jared Gilkerson for inviting me on AfterBuzzTV for an interview recently. Really enjoyed it. Be sure to check out their channel on YouTube.

It's the Third of June