And here is a 90 second podcast:

Tags: Great White Bear, Ice Bear, polar bears, book
For reasons that are unclear to me, there has been a sudden resurgence in media interest in my book. Rather than analyze this endlessly, I'm just happy to go along for the ride. Here's one I did recently, on the Relevant Radio Network, which I especially enjoyed. I was particularly grateful that the host, Sean Herriott, very kindly and unexpectedly asked me about my parents at the very end. My segment begins at about 29:50. Read More
Be the first to comment

A couple more reviews, and some thoughts they prompt

Tags: Great White Bear, Ice Bear, polar bears, book
Reviews of The Great White Bear still trickle in, including two recent blogs. This one, on a blog called Beyond Penguins and Polar Bears, took a straightforward approach, and focused on the remarkable nature of polar bears - which is great, as that is what I had wanted more than anything to convey. Read More
Be the first to comment


Many thanks indeed to Lori Wark, who runs the excellent blog Adventures in Climate Change for this interview with me about polar bears and The Great White Bear. Read More
Be the first to comment


It isn't easy, studying polar bears in the wild. They live in inhospitable environs and travel thousands of miles a year. Approaching closely is to be discouraged on the grounds that they are extremely large carnivores with powerful paws and sharp teeth. But John Downer and his technical wizard Geoff Bell have found a way to get up close and personal, without getting up close and personal.

With cameras that can be operated remotely or set to activate when they detect movement, and which can be disguised as snow drifts or icebergs, they have been able to capture polar bears in their natural environment the way nobody else has done before. Their show, Spy on the Ice aired on the BBC in Britain at the tail end of 2010, and here in the US on Animal Planet yesterday.  Read More
Be the first to comment 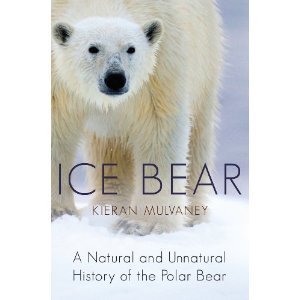 The book is now officially, well, official. "Ice Bear," as it is called in the UK, was officially released today, and to mark the occasion I was interviewed for the best part of 30 minutes by Phil Williams, guest host of the Richard Bacon Programme on BBC Radio 5 Live. Many thanks to Phil and the crew for the interview, and to the excellent Emma Mitchell of Random House for setting it up. Back to the US tomorrow; "The Great White Bear" is officially released on the western side of the pond on January 12. Read More
Be the first to comment

Tags: book, polar bears, Great White Bear, Ice Bear
"Ice Bear" is officially released in the UK on January 6, three days from now. After a final couple of days of rest and relaxation here in Weston-super-Mare, I'll travel to London on Wednesday for a couple of nights. I have at least one interview set up, on BBC Radio Five Live on Thursday afternoon, and then on Friday, it's back to the States in time for publication week of the US version, "The Great White Bear." Read More
Be the first to comment

Tags: polar bears, book, Great White Bear, Ice Bear, Family
I'm heading back to the UK tomorrow for what I imagine will be the last Christmas I spend at the house in which I grew up. It's a strange feeling and an emotional sensation, and I suspect it will be a difficult few weeks.  Read More
Be the first to comment

Tags: polar bears, book, Great White Bear
Just returned from Las Vegas - and quite possibly the best fight of the year - to a cold and rainy Washington DC. But there, on the doorstep, and just about sheltered from the elements, was a padded envelope containing three advance copies of "The Great White Bear." After all this time, it's actually a real book. Feels great, if slightly surreal, to hold it in my hand. UK publication date is January 6; in the US, it's January 12. Read More
1 Comments

How exciting! I will look forward to reading this a lot. It is our work Christmas lunch today, so there is a kind of holiday atmosphere in the office this morning, allowing me to bypass the normal Calvinistic attitude to my job and have a look at your blog, before my 10am meeting. I¡¦ve just read the entry from November which says you will be updating it more regularly for the benefit of people such as me ¡V thank you! I shall now visit it more often.
Also Amir Khan (December 6 blog) is a Bolton Boy so it was interesting to read your brief account of his visit to Las Vegas to fight. The last time I saw live boxing was a match held at the McVities biscuit factory on Stockport Road (Manchester) ¡V it was a very visceral affair. I was surprised to enjoy it as much as I did. There was a big group of us and we all went out for fish and chips afterwards. I guess they don¡¦t have fish and chips in Las Vegas..? Just Elvis impersonators and sky-diving vicars and suchlike. Don¡¦t you call chips ¡¥fries¡¦ or something? You can tell how much I know about the USA ƒº It is frrreeezing here in Manchester today, but nothing like it was in Bolton last week (-12) although snow is forecast for later on today. I hope that you are well. You have my email address from this post ¡V please feel free to get in touch. I¡¦d love to hear from you.
Sue