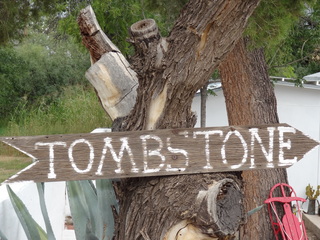 I was feeling a little blue yesterday, a little anxious about what the future holds, particularly financially. A nice contract that I have been fortunate to have for the past several months is about to expire, and I a) don't think I've done an especially good job; b) am not sure if it will be renewed at some point down the road; and c) have absolutely no idea what I will do financially if it doesn't.

Add to that the little things that always seem to converge at such moments: my TV is dead; my wireless router just went on the fritz; my truck needs several hundred dollars' worth of repairs. So what with one thing and another I was feeling sorry for myself.

Then I talked to my girlfriend in Alaska for a while and that cheered me up, especially knowing that I will be seeing here again in a week or so. And after we finished talking she texted me, saying "You still feeling that Tombstone glow? Don't forget, you get paid to do things like go to Tombstone."

And she is quite right, of course. I DO get [aid to do things like go to Tombstone, which is what I did last week, after I returned from Las Vegas.

I am an unabashed obsessive fan of the movie "Tombstone", the epic story of the Earps, the Clantons, and the Gunfight at the OK Corral. That fandom led to reading about the reality of those 29 seconds and the events that preceded and followed from the gunfight. And that in turn led to my contacting David Rowell, my editor at the "Washington Post Magazine", asking if I could write an article on the place for him. He said yes, and so from Vegas to Tombstone I went.

On the surface, Tombstone is a superficial place, a few blocks of touristy, adult theme park. But scratch even a little beneath the surface, and you'll find history and a complex mix of emotions and attitudes toward that history. For me, standing at the corner of 4th and Allen never once ceased to bring a smile to my face, as I pictured the Earps and Doc Holliday standing at that very spot before heading off to meet the Clantons and the McLaurys.

As I wrote to David while I was there, "I am having way more fun than a person should be allowed to have while on assignment." I'm grateful to Loni for reminding me of that.
Be the first to comment