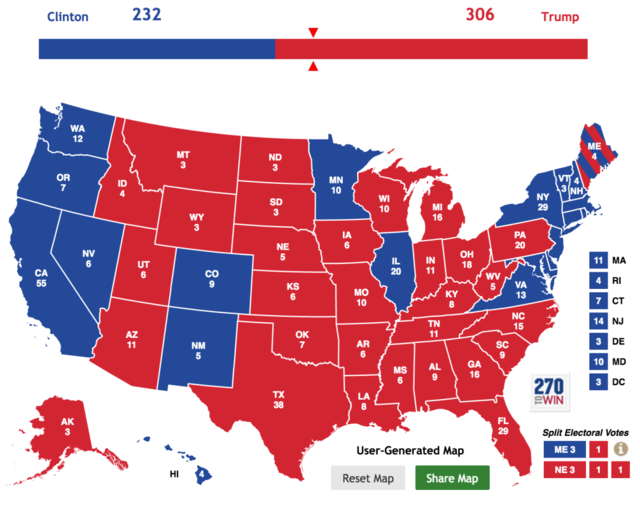 When you're wrong, you're wrong. Being far from the only person to have called the election incorrectly is no great solace. We are now confronted with the reality that a racist, sexist, ill-informed, lazy, climate change-denying demagogue will be our president for the next four years.

It was, on the face of it, an overwhelming defeat for Hillary Clinton and a repudiation of the Democratic Party and the Barack Obama Administration. In reality, it was a lot closer than that. Parties rarely win 12 consecutive years in power, and after eight years of Obama, his former Secretary of State actually won the popular vote, just as her husband's former Vice President did in 2000. As this piece points out, had just 1 in 100 Trump voters switched their votes to Clinton, the result would have been a Clinton win and a very different analysis would be in play. Similarly, distraught Democrats can point to any number of factors - James Comey, voter suppression in North Carolina, sexism, Jill Stein voters - and argue that without any one of them, the outcome would have been different, and they'd probably be right.

And yet, it's hard to escape the conclusion that that would have been just a Band-Aid. There was much to commend the idea of the first female Commander-in-Chief, and Clinton would likely have been a highly informed, sensible and responsible President. Yet, at a time when the left, like the right, is looking to remake the system, we nominated a creature of that system, someone who voted for the Iraq War out of political expediency, someone who has become the exemplar of all that so many people hate about what is lazily dubbed the 'elite'. Too many of us, including me, felt that Trump's clear unsuitability for the job, contrasted with Clinton's competence, would be enough. It wasn't. We needed to show we understood the anxieties of others, instead of belittling them. We didn't. We needed to make our case while listening to theirs. We didn't. We needed to nominate someone who could inspire one side at least, while not turning off the other. We didn't. Whatever horrors await us over the next four or more years - and whatever long-term consequences there may be for the climate, and for society at large - we progressives own it as much as those who willingly cast their ballot for an unqualified buffoon.

Donald Trump is now President-Elect, and he deserves the opportunity to prove us wrong. If he fails to do so, then we will be ready. We will organize, we will rebuild. We will come again.