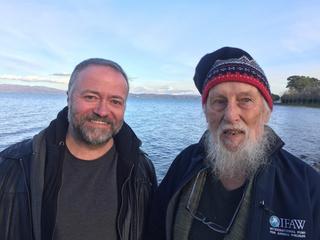 Last week, my friend and mentor, Sidney Holt was laid to rest in the village of Paciano, Umbria, Italy. He was 93, and had passed away on December 22.

But there was so much more. Sidney was an inspiration. His intellect remained fierce, and his knowledge broad and deep, until the end, and he loved to share both - whether asked to or not. (All of us who worked with him have memories of being caught up in the dreaded Holt mass email chain, or receiving unsolicited criticism of published works that invariably began along the lines of: "Enjoyed your piece on X. But ... " and continued on for multiple paragraphs or even pages. In later life, as his vision failed him, he continued sending those correctives, except that now they were largely misspelled simply because he couldn't quite see what he was writing.)

Put simply, Sidney was a damn rock star, even to the end. He must have been about 85 when I was with him at a conference in Boston and a young grad student haltingly approached him and asked if he would sign her copy of his landmark 1957 treatise on fisheries management. A year or two later, he was holding forth in London's Fishmongers Hall on the characteristics of the sigmoid curve.

When I was a cub wannabe whale-saver in 1985, I was immensely honored when Sidney, in response to my request for information on whaling, sent me offprints of his most recent articles. In 1987, when Sean Whyte and I founded the Whale and Dolphin Conservation Society, his very public support was not only of immense value, it affixed to us an imprimatur of authority we would not otherwise have earned.

Sidney could be an irascible old sod, but he was at heart profoundly kind and gentle. He would dismissively refer to me as "the Irishman," (sometimes "that bloody Irishman") but with a twinkle in his eye. It always made me proud when he asked me to work with him on something, and nothing made me more so than, thanks to diligence of Patrick Ramage and Leslie Busby, helping shape his memoirs into a printed product. We were working on a new version when he passed; I deeply regret we could not finish it in time, but as Leslie says, "what matters is that we have his remarkable story to share, I think as a posthumous tribute it will be remarkable and appreciated by so many."

So, yes: scientist, conservationist, inspiration, mentor, rock star - Sidney was all these things. But to me he was one thing above all others: he was my friend. And I have never in my life been more proud to be able to say that of anybody.

(Here is a lovely obituary by Paul Brown in The Guardian.)